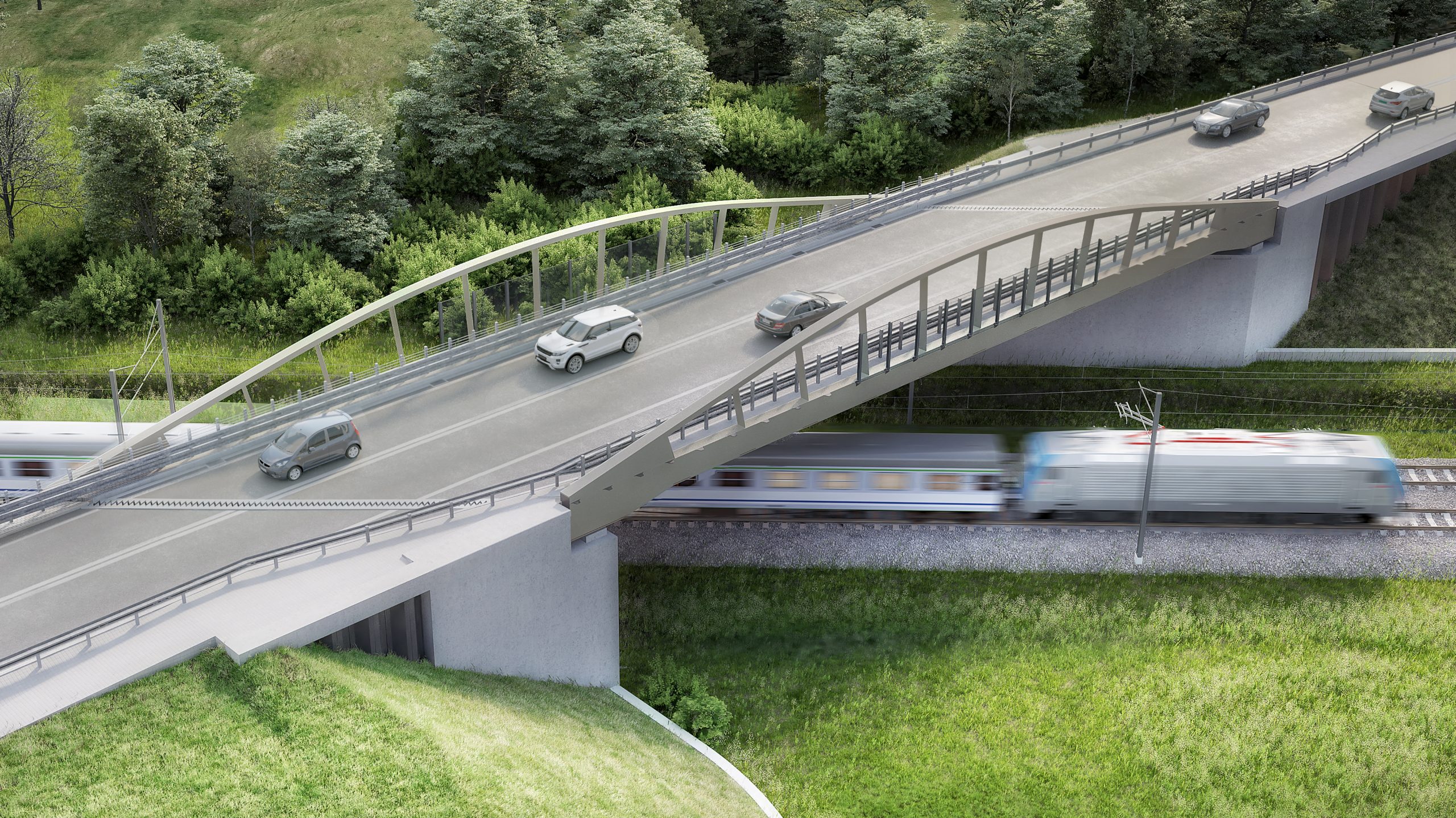 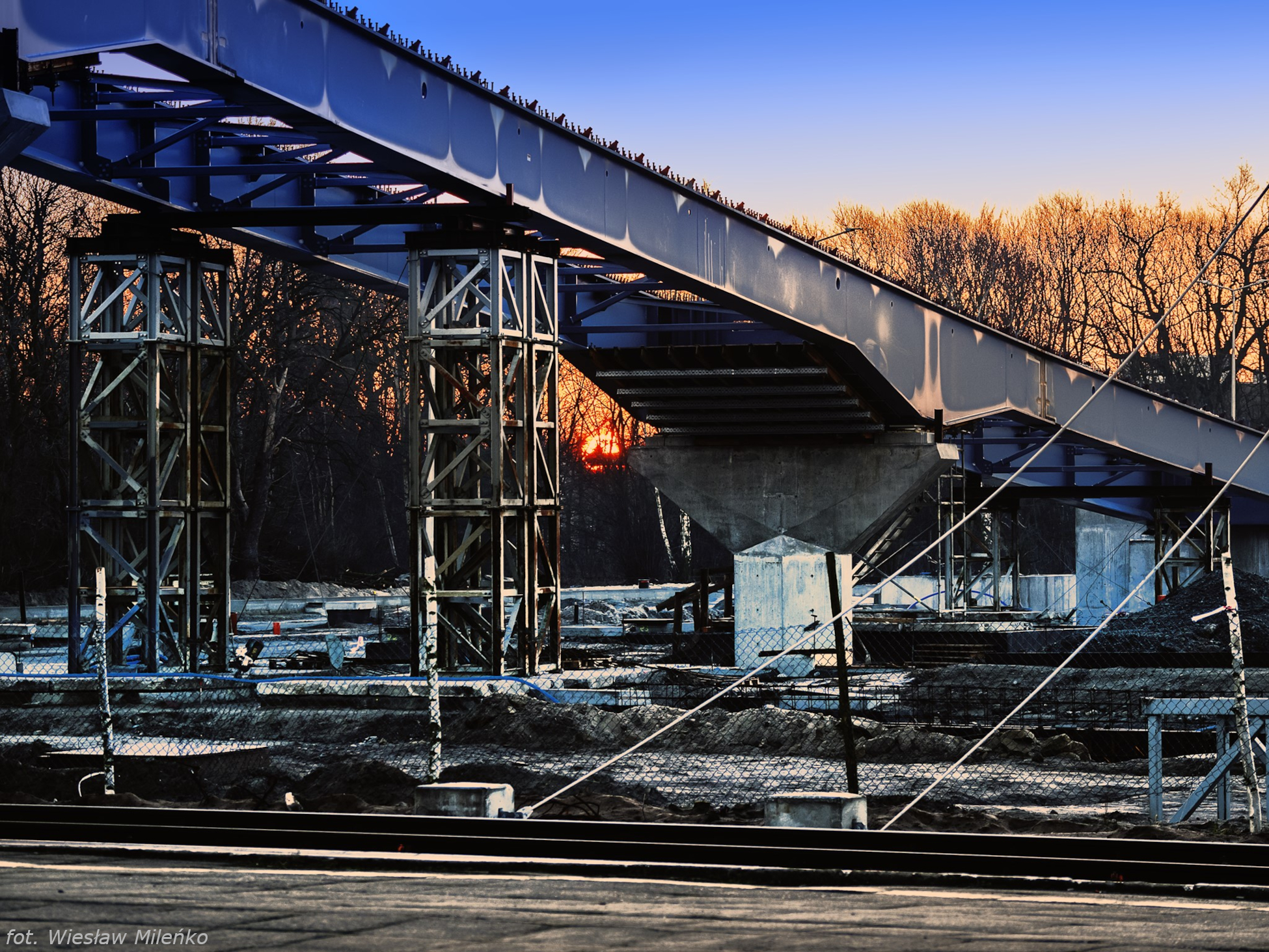 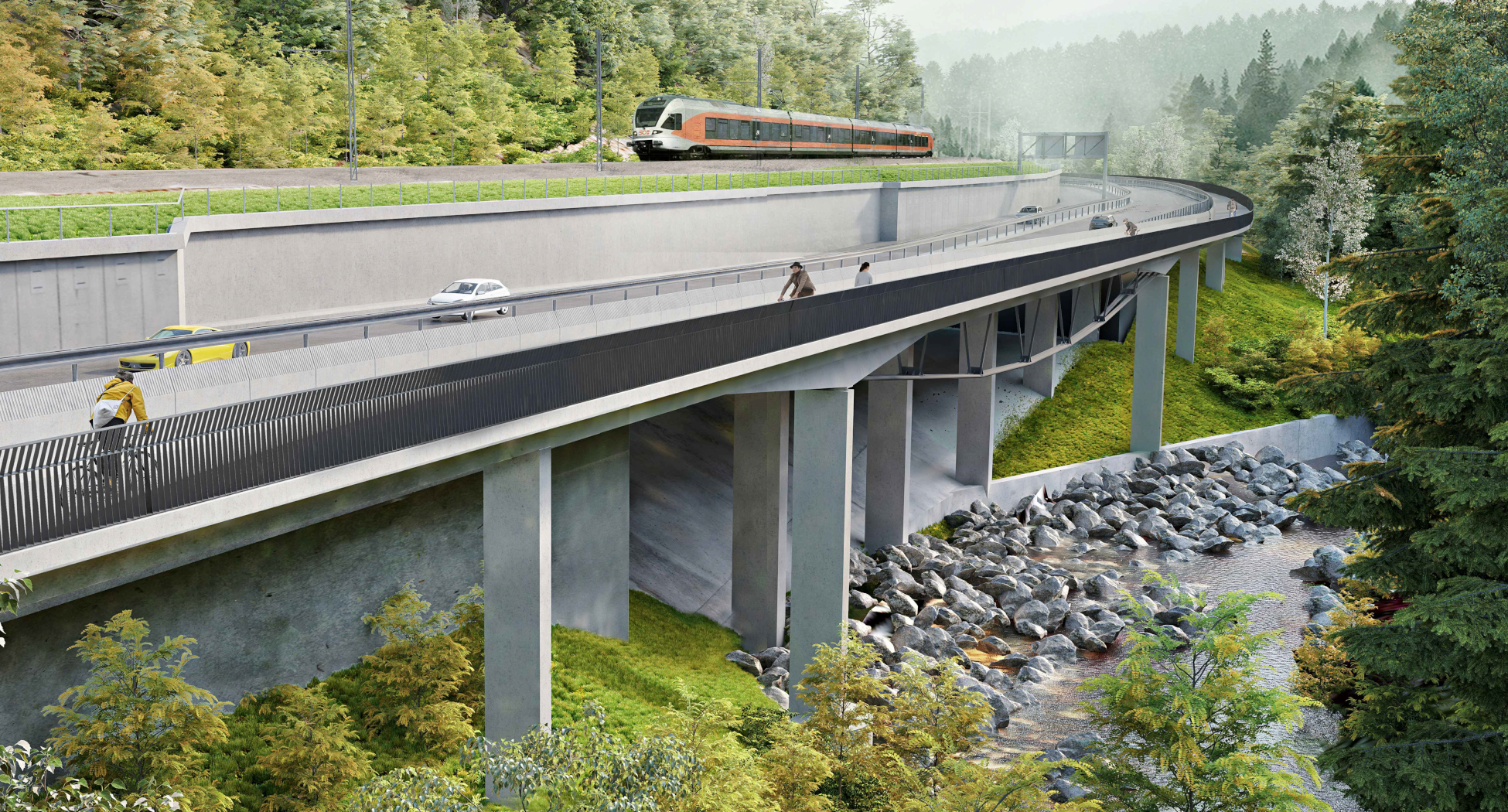 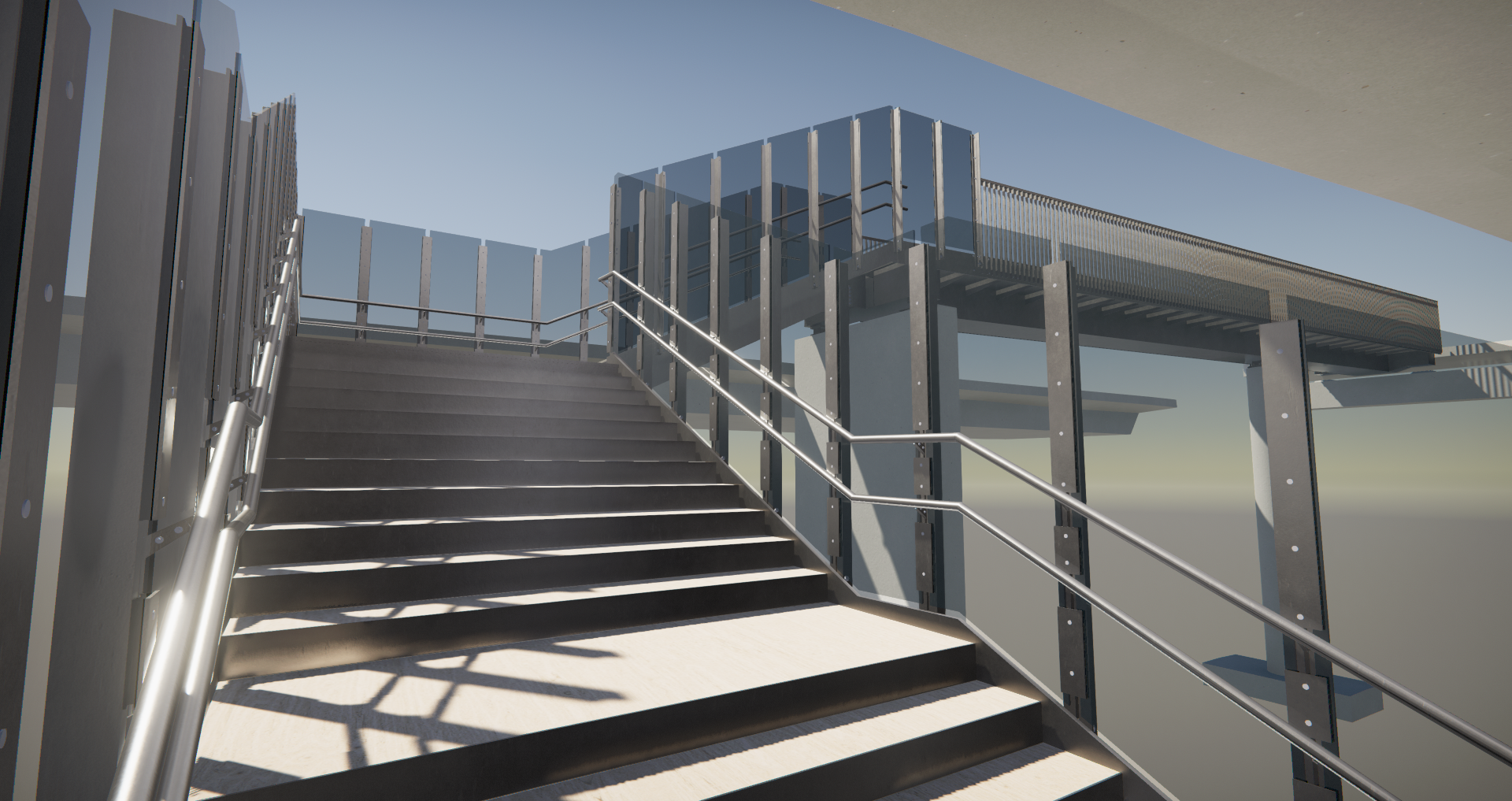 Design for replacement of expansion joints of the MA-470 flyover 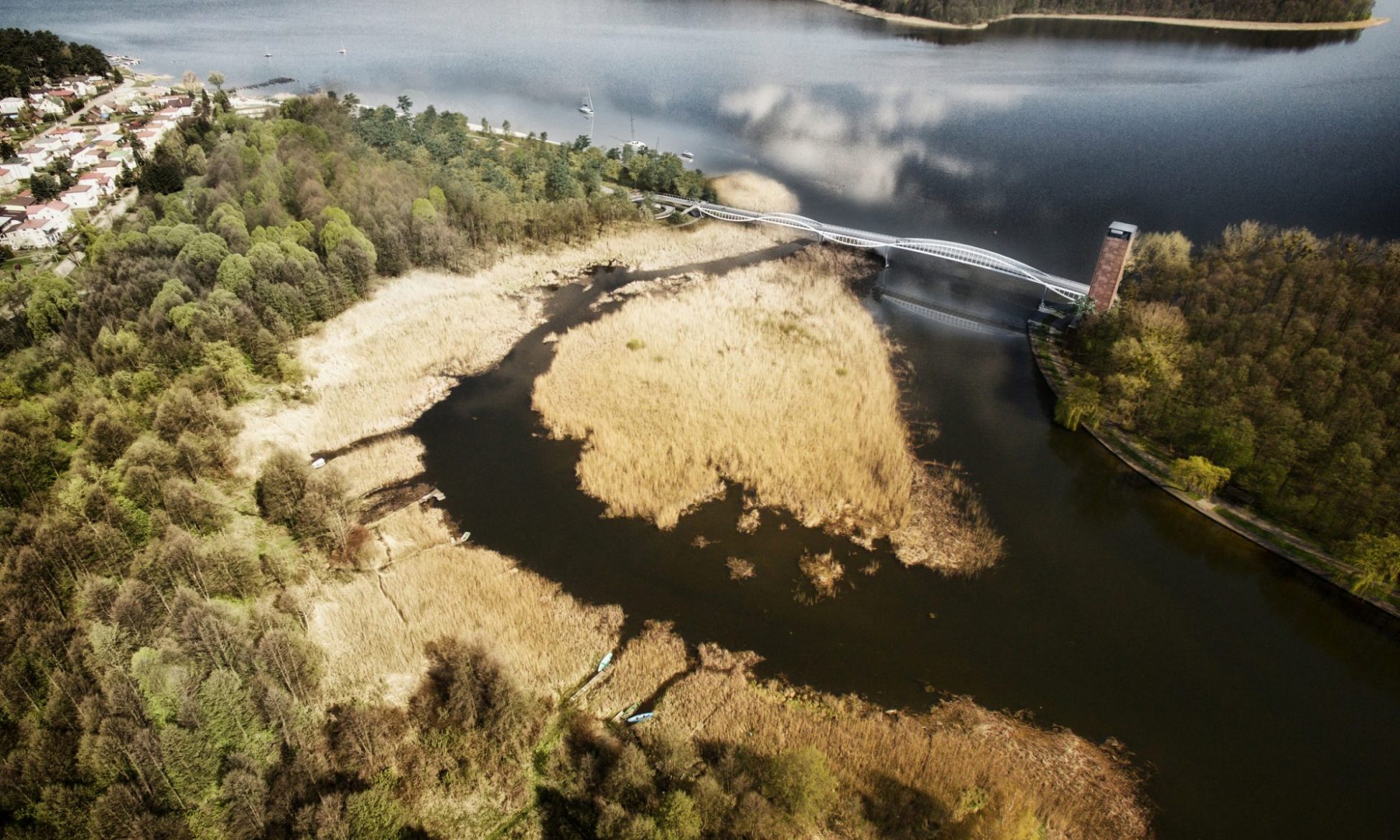 Pedestrian and bicycle footbridge over the Netta River 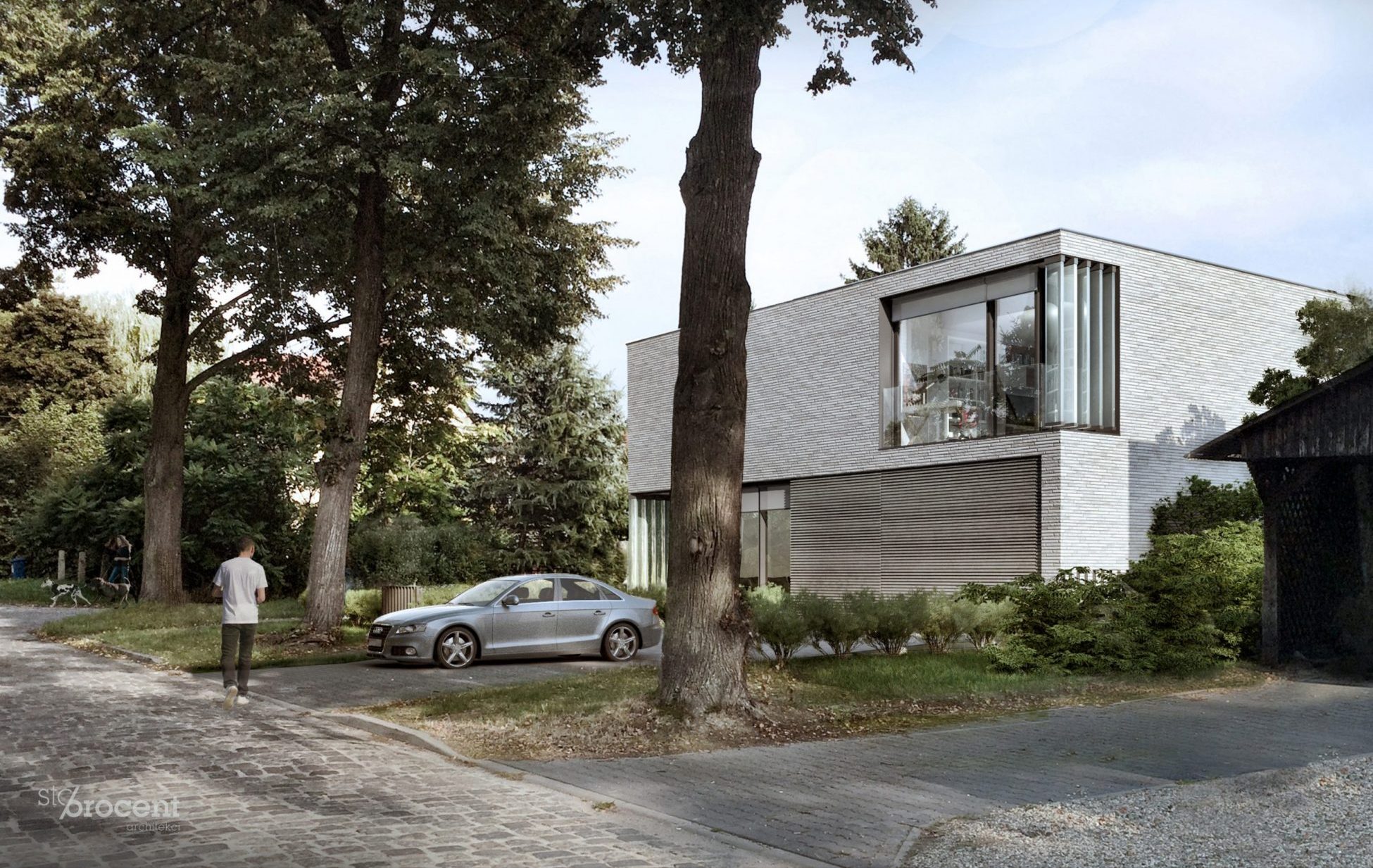 Modernization of national road nr 46 in Dąbrowa, demolishing of the existing and construction of a new viaduct over railway line nr 132 in 95+294 km.

GDDKiA in Opole (General Directorate for National Roads and Motorways)

Steel tied arch viaduct has been designed with the span of 41,6 m and skew of 42o. Due to undisturbed road traffic and railway line operation requirements and future double carriageway express road planning the viaduct has been located next to the existing one. Significant increase of railway line clearance has been also specified. BIM technology significantly facilitated the geometric alignment of the new viaduct with the existing road and enabled a detailed analysis of the construction stage, allowing for uninterrupted road and rail traffic.

Superstructure consists of two variable hight steel box girders connected by transverse composite crossbeams. The structure is supported on pot bearings located on RC abutments. All steel elements on the underside of the viaduct have been designed of weathering steel in order to minimize the maintenance of the structure in the immediate vicinity of the railway line.

The designed flyover will enable road traffic between the existing manoeuvring yard at the ferry stand no. 5 and the planned external parking lot at Danish Street. The deck is curved both in plan and in profile with radius of 245 m and 800 m respectively with the latter limited by straight 9% sloped sections at both ends.

The five span beam superstructure consists of two composite variable depth steel girders spaced at 5m. The girders at the piers were designed as a double composite, which significantly reduced the weight of the steel structure and enabled efficient assembly with mobile cranes over the railway tracks.

Design competition for 1,1 km long path for bicycles and pedestrians between Biberbrugg and Chaltenboden.

3-rd place in the competition

The aim of this design competition was to develop a technical solution for an over 1.1 km long path for bicycles and pedestrians running along the existing four-lane cantonal road between Biberbrugg and Chaltenboden. Due to a very difficult terrain containing steep slopes, existing retaining walls, gallery bridges, and the river, four bicycle/foot bridges had to be designed with lengths of 186 m, 96 m, 216 m, and 132 m. Taking into account very limited access to the site and, in general, very difficult site conditions, the design was developed aiming at employing modular systems and off-site prefabrication as much as possible. Consequently, all the bridges were designed with typical interior spans of 20 m and end spans of 18 m. The deck was designed with a single precast prestressed concrete box girder, in-situ concrete deck slab, and an in-situ monolithic connection between the girders and the piers.

To avoid piers in the river, the main span crossing the river had to be minimum 70 m long. Consequently, the river span with two adjacent spans were designed as a steel box girder with a composite concrete deck. Furthermore, the river span was designed with underslung cables strengthening the box girder and providing required stiffness.

Construction of a light rail along Copenhagen's 3rd ring road, based on an agreement between the Danish government, the Capital Region of Denmark and 11 municipalities (Lyngby-Taarbæk, Gladsaxe, Herlev, Rødovre, Glostrup, Albertslund, Brøndby, Høje-Taastrup, Hvidovre, Vallensbæk, Ishøj).

Flyover MA-470 along the A1 motorway in Knurów

GDDKiA in Katowice (General Directorate for National Roads and Motorways)

The flyover was designed as a composite slab-and-beam structure (steel girders and a cooperating reinforced concrete slab), with 15 spans simply supported and 4 spans in a continuous arrangement. The girders are supported via pot bearings on reinforced concrete abutments and column pillars, founded indirectly on drilled piles. The total length of the superstructure between the extreme support axes is 824.00 m. Modular expansion joints were used between the simply supported spans. This solution was adopted due to the foundation of the structure in areas of mining damage.

In partnership with the CADmost design office, technical documentation was prepared for the replacement of expansion joints in the axes of supports 2 and 5, as well as the replacement and rectification of bearings in the axes of supports 16 and 18. The project involved scraping the slab in a section to extract the failed joints, followed by the insertion of new ones, completion of reinforcement, concreting, insulation and paving.

As part of further upgrades to the facility, noise was reduced through the use of additional acoustic covers for expansion joints, and access platforms were installed to facilitate inspection of the facility's condition.

The project included a deterministic load-bearing capacity assessment and the recommendations for the further operation of the structure. In 2009, the structure suffered a failure due to ground scour under one of the bridge supports, which led to the destruction of that support and two adjacent freely supported spans. As a consequence of this failure, detailed studies and analyses, including load-bearing capacity assessments, material tests, physical and numerical modeling, were carried out to determine the safety of the structure. The completed project included a structured and critical analysis of the materials and studies collected as a result of these activities, and the recommendations based on them for the operation of the facility, necessary maintenance and repair activities.

Pedestrian and bicycle footbridge over the Netta River in Augustów

Competition for the development of a design concept for a pedestrian and bicycle footbridge over the Netta River and footbridges over the entrances to the three existing marinas on the north-eastern bank of the Netta River in Augustów.

The footbridge over the mouth of the Netta was designed as a continuous multi-span structure with steel box girders and a deck in the form of a steel orthotropic plate. The main girders of the spans located above the entrance of the river to Lake Niecko have been designed in an arched form, with the arches in some of the spans located above and in the others below the level of the footbridge deck.

The footbridges over the entrances to the marinas were designed as steel structures with a cross-section formed by box girder with cantilevers and an orthotropic plate.

The avant-garde shape of the building, distinguished by numerous overhangs of the first floor, large glass surfaces and spacious interiors, required a non-standard approach to the structure of the building. The structure has been designed in a mixed technology - traditional brick and reinforced concrete with numerous use of steel elements supporting the ceilings. Advanced structural analysis and the optimal use of technology made it possible to implement a bold architectural concept.

The modern shape of the building, distinguished by complicated geometry and large glass surfaces, required a non-standard approach to the structure of the building. The structure has been designed in a mixed technology - traditional brick and reinforced concrete with numerous use of steel elements supporting the ceilings. Advanced structural analysis and the optimal use of technology made it possible to implement a bold architectural concept.